Reading Between the Numbers 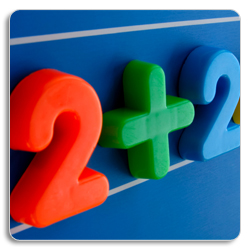 At BJU Press Testing & Evaluation, some of our most rewarding calls come from parents and teachers who want to know more than the difference between a percentile rank and a stanine score. They want to know what to do with the scores. Two calls stand out in particular.

As a teacher, Sarah already understood how to read the numbers on her class’s score reports. “Joshua” was four years old and was just finishing K4. His parents were eager to advance him straight on to first grade, but Sarah was convinced he wasn’t ready. She had decided to wait to see how he scored on the school’s standardized tests before having a meeting with the parents. Joshua’s report came back with percentile ranks in the 40s and 50s, which were in the average range, though leaning toward the lower end of the range. Sarah called BJU Press and spoke with the Testing & Evaluation department to learn more about the details of the test content. She knew he wasn’t ready for first grade, but she also knew that he performed well in class. She wanted to understand how to reconcile the test results with her knowledge of Joshua’s day-to-day work in the classroom. Together, we went through Joshua’s Performance Profile to see how he did with individual skills.

While Joshua had an “average” score for each subject as a whole, the breakdown of the specific objectives was not nearly so even. The specific highs and lows had merely balanced each other out enough to make an “average” overall score for the subject. In Listening (a precursor to reading and language), Joshua had top marks in the literal meaning of the stories, but his marks for inferring concepts or outcomes were noticeably weak. Math was similarly “random” in performance—high marks for simple addition with much weaker marks for recognizing number patterns or drawing inferences about shapes. These different subjects share similar cognitive skills. With the scores, we were able to help Sarah connect the dots and see Joshua’s pattern of weaknesses and strengths.

Sarah knew that Joshua was bright enough to pick up new information at a young age, but he was not as adept at knowing what to do with that information. He couldn’t classify it, predict it, and so on. Joshua might be bright enough for first grade, but he wasn’t yet mature enough for the more complex reasoning skills that first grade would require. Sarah could go into the parent-teacher meeting armed, not just with her teacher’s intuition, but also with a clear understanding of where Joshua’s skills placed him. She was ready to show the parents how they, too, could learn to “read between the numbers.”

Annie was homeschooling her two boys, “Alex” and “Aaron.” Since they were just fifteen months apart, she was schooling them in the same grade. While the boys were generally competitive and learned the same material side-by-side, Annie knew that Alex was not showing his full potential in math. Alex saw that he had the same scores as his brother, but Annie knew each boy was unique. She wanted Alex and Aaron to develop the skills that they had potential in. She called the Testing & Evaluation department to ask if there was anything she was missing on the test scores to prove to Alex that he really wasn’t scoring as well as he could.

Intrigued, we evaluated the scores for both boys from the previous two years. Sure enough, they scored almost point-for-point in each subtest. However, both boys had used only the achievement test, which is designed to measure performance in a subject. Since Annie was really describing a difference in potential, we recommended that Annie add an abilities test to her annual assessments for that year— (and to call us when the scores came in). Annie gave the boys a combination of the CogAT® and The Iowa Tests®. When she called to say she had received the reports, our office noticed that, as before, the boys were nearly point-for-point on their Performance Profile reports. But this year, Annie also had their Profile Narrative reports from the CogAT, an abilities test designed to measure reasoning skills instead of academic achievement.

We showed Annie that Alex’s CogAT scores revealed high aptitude for reasoning with numbers, yet Aaron’s scores showed a slightly low aptitude in that area. Alex’s scores were showing that he believed he was doing well enough so long as he scored as well as or above his brother. Annie could have missed the real story if she had only looked at the overall math score that the state required. One son was settling for an easy average score while the other son was stretching hard for the same score. Annie was able to have a teaching moment with each of her boys as she encouraged them to challenge themselves to meet their individual potential.

New Form E Iowa Assessments™ make it much easier to connect the dots—their Performance Profile report now clearly lists three tiers of cognitive reasoning for each subtest. Simply look for which tier was strongest or weakest. (Note: Other testing services may or may not provide this particular report style.) Improving higher order reasoning skills, such as organizing ideas, will affect multiple subjects such as science (classifying information) and reading (outlining key ideas).

While the percentile ranks, stanines, and GE scores make great summaries of the “big picture” and fill in the blanks for required academic records, always be sure to read beyond the numbers to see the “full picture” so you can make the best decisions for your student with confidence.