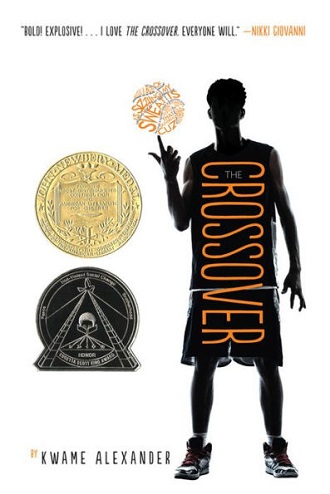 (Note: It is not the purpose of this review to draw conclusions for the reader but rather to focus on literary elements and topics of critical importance for the Christian School Solutions constituency.)

The ALA presented the 2015 Newbery award to Crossover by Kwame Alexander and named two Newbery Honor books—Brown Girl Dreaming by Jacqueline Woodson and El Deafo by Cece Bell.1 Crossover is written primarily in free verse (no rhyme and no meter), and it also includes some rap and hip-hop poems, Brown Girl Dreaming is written in free verse, and El Deafo is a graphic novel. Three books honored, and not a standard paragraph among them.

Although Kwame Alexander’s name is new to the ALA list of winners, his website shows the breadth of his work: “[He] has written 18 books, owned several publishing companies, written for the stage and television . . . , recorded a CD, . . . hosted a weekly radio show, worked for the U.S. Government, and taught in a high school. . . . Each year, Kwame visits hundreds of schools sharing poetry, conducting [Book-in-a-Day] workshops, and reading his books.”2

Crossover tells the story of Josh and Jordan Bell, twin brothers who are almost thirteen. They are standout basketballers and true sons of their father, a champion in his day. Their mother, Dr. Crystal Bell, is the assistant principal of their school. She is a woman who loves her husband and sons and values education, good health, and honorable behavior.

The poems are collected in six major sections: “Warm-Up,” “First Quarter” through “Fourth Quarter,” and “Overtime.” Basketball is at the heart of the story, and sibling rivalry and athletic competition fuel many of the poems, but a larger story emerges. It is a story of priorities, love of family, and consequences—consequences that come both of inaction or angry action.

When Jordan turns his attention to a pretty girl, tensions increase between the brothers until the situation reaches its peak on the court, and a well-placed pass is fired by Josh directly at Jordan’s face. After much blood and a trip to the hospital, Jordan is bandaged and the family returns home, each of them silent and brooding. At school, Mom (Dr. Bell) calls Josh into her office to deliver his consequence, seasoned with a bit of her wisdom. He is suspended from the team because “boys with no self-control become men behind bars.”3 No matter that the championship game may be lost if Josh does not play. The team and the school will learn too.

In the end, after a few thwarted attempts, an apology is given and received, and the family moves on to deal with the larger, life-changing problem that the book has hinted at from the beginning. I won’t spoil the story for you by saying more than that.

This is an interesting, albeit, unconventional book with clear moral values driving a loving family through real and traumatic change. It is both thought-provoking and refreshing to see this family maneuver through the slice of life Alexander reveals to his readers.

The hip-hop and rap verses ring true within the world of these boys, but these poems may be off-putting if those art forms are not common to the reader. And because both hip-hop and rap are associated with oral presentations, the written rendering may lose a bit in translation.

Ten basketball rules appear at intervals, and although they do apply to the game, they have a deeper meaning for life. For example, Basketball Rule #10 reads

“A loss is inevitable,
like snow in winter.
True champions
learn
to dance
through
the storm.”4

I hope the reader does not miss the point.

Josh is academically strong, and he shares vocabulary words throughout the book, each with three meanings. His first definition comes from the dictionary, then he uses the word in a sentence, and his final statement ties the word to the Bell family. This is a nice device, consistently executed each time it appears.

The language of the story is strong, but not vulgar; it is authentic, but not crass. Josh makes veiled references to his parents’ marital intimacy that may be uncomfortable for some readers and may go right past others.

The poems are well crafted overall and are accessible to the intended reader, successfully conveying a cohesive story. Some of the poems are simply beautiful, including Josh’s apology, “Dear Jordan.”5 It is formatted in two columns and can be read top to bottom or left to right without diminishing the message.

This is an unusual book, both in form and content. Like many books, it will not resonate with every reader, and the deeper message may not be clear to nine- to twelve-year-olds. It could be that this is a book adults will like for children. Time will tell.

It is a book I feared I would dislike, one I would find difficult to comprehend. Turns out, I was wrong.