In a culture of moral relativism it is critical that Christian school students need to be taught ethical standards as the Bible teaches them. 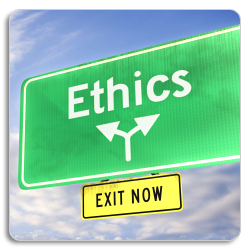 As the public education system has systematically removed a Christian philosophy of education since the 1960s1, a few analysts have decried the apparently valueless instruction (and students) that have followed.2

More than one critic, many of them secular, has argued that amorality or moral relativism cannot produce a truly humane or desirable (or even functioning) culture. A few educators have provided resources to those who want to teach values or ethics in a religiously neutral environment.3

Even though our society pretends to believe that there are no absolutes, no one really lives that way; the most aggressive moral relativist will insist on getting the correct change when he purchases something, and the most radical public educator will directly condemn, with moral language, those who disagree with him even as he proclaims that there are no moral absolutes.

So there’s really no question. Students should be taught some sort of ethics.

Of course, that raises a number of other questions—most obviously, the question of authority or source: whose ethics should they be taught? That’s a question that deserves long and careful analysis, and there has been much ink spilled on it from all quarters. Since I’m writing to teachers in Christian schools, I’ll assume that this question is settled in our minds. We accept the authority of Scripture, and we would all like our students to order their lives after the biblical ethical system. There is right and wrong, and God has spoken on these matters. Next question.

What is the biblical ethical system? There are lots of people who claim to believe the Bible, and they disagree on a lot of ethical issues. Is abortion ever defensible? Some Bible believers would argue that when the mother’s life is genuinely at risk from a pregnancy, killing the baby can be justified on the ground of self-defense. Others would make a moral distinction between killing someone who is intentionally attacking you or even someone who is failing to show reasonable care and is thereby unintentionally endangering your life4, and killing an infant, who cannot be held to account for his actions, even those that endanger the life of his mother.

Conceding, for the moment, that good people might well disagree on the application of a biblical ethical system to specific situations, there need not be serious controversy over what the Bible teaches as to the foundational principles of an ethical system. Jesus directly answered a question that spoke not only to what is good but also to what is best; the greatest commandments, He said, were to love God and to love one’s neighbor (Matt. 22:35–40). It is reasonable to conclude, then, that these two things are the Greatest Good.

The Greek word for love used here is agape. This is the only kind of love that is commanded. It is thus a willful or volitional love; you may choose to do it or not to5. We are to choose to love both God and our neighbor.

Love of God in the Scripture is consistently tied to glorifying Him. The Hebrew word for glory, chabod, has a root sense of weight or massiveness and hence of value: heavy things tend to be more valuable than light things. We glorify God when we demonstrate by word or action that He is valuable—so valuable, in fact, as to be uniquely valuable, not ordinary. That in turn is the root concept of the Hebrew word qodesh, which we often translate as holiness and which many theologians identify as God’s foundational attribute.

Jesus illustrates the love of neighbor in particular with the parable of the Good Samaritan (Luke 10:29–376). What is love, then? What does it look like? The answer is unambiguous: the Samaritan chooses to inconvenience himself (he takes time, he risks social rejection by contradicting the actions of the religious leadership, and he assumes a financial cost) in order to meet the needs of someone else—in this case, someone he doesn’t know (and may not even like).

So we are to place the well-being of both God and our neighbor ahead of our own, thereby demonstrating their high value relative to us. That’s ethics in a single sentence. Not difficult to understand. But in a fallen world, very tricky to apply.

Implementation in the Classroom

And because it’s tricky, our students need a lot of practice at it. I’m still surprised at how easy it is to take even college students, just weeks away from independent adult life, and tie them in knots over what should be a fairly simple moral decision7. When they first face the case study, they’re quite confident; but a few subversive questions and an occasional equivocation, and suddenly they have no idea what’s right anymore. Secular educators have notoriously used "the lifeboat problem" and similar exercises to convince immature students that in fact moral certainty is impossible and that they’re just going to have to "live and let live" or do "what’s right for them."

So how does the teacher give the students that practice? For starters, the teacher needs to break the shackles of the lecture method. The great advantage to lecture, of course, is that it’s the most efficient use of time. The class periods are finite, and the standards, seemingly, are not; and we have to get it all done, so just hang on while I talk as fast as I can. But is there any long-term benefit to squeezing in more data if the students aren’t going to remember it anyway? I remember the joy of discovering that my students could be assigned to read those facts outside of class and held accountable for them on tests, without my having to actually speak them all during a class period. I could be free to slow down in class and take time to interact with the students, hearing and healthily challenging and questioning their ideas, thereby leading them with the Socratic method through an experience that they are much more likely to remember for a long, long time than anything I could possibly have said in a lecture.

It is not hard to find opportunities to interact on ethical questions in any subject:

Suddenly, the student isn’t asking anymore,"How am I ever gonna use this?" or worse, "Will this be on the test?"

"First Do No Harm"

This is a dangerous business. As was noted earlier, a teacher can lead a student to complete moral confusion and then leave him there. That’s unforgivable, whether done intentionally by a secular educator or accidentally by a Christian one. How can you avoid that?

1This trend was given its greatest impetus by the infamous Supreme Court decision in Engel v. Vitale (1962) in which the Court ruled 6-1 (2 justices did not participate) that a nondenominational prayer composed by school authorities in New York State was unconstitutional even though participation was voluntary. In an earlier decision (McCollum v. Board of Education District 71 [1948]) the Court had ruled (8-1) that voluntary religious classes held on school property in Champaign, Illinois, were unconstitutional.

2Perhaps the most graphic illustration of the problem was the attack on Columbine High School near Denver, Colorado, in 1999. Two disaffected students killed 12 fellow students and 1 teacher (as well as themselves) in a shooting rampage.

5I do not accept the common allegation that agape love is the higher, divine love, while philos is merely human. The Father Himself is said to have philos for the Son (John 5:20) and for Jesus’ followers (John 16:27; Rev. 3:19), and Jesus is said to have philos for Lazarus (John 11:3, 36). Paul pronounces a curse on any who do not have philos for Christ (1 Cor. 16:22). John famously describes himself as "the disciple whom Jesus loved" four times; in three of those, the word is agape (13:23; 21:7, 20), but in one it is philos (20:2). There is clearly more to the distinction between the words than human or divine source or quality. I interpret the biblical usages to indicate that philos is the kind of love that springs up naturally (some people are just "likeable") while agape is love that is willed (that’s the love we show toward those who are not likeable). Both God and man demonstrate both kinds of love. In either agape or philos, love is placing the well-being of the one loved ahead of the well-being of the one loving.

6Luke makes it clear that the parable is part of Jesus’ answer to the original question, "Who is my neighbor?"

7As just one example, virtually everyone agrees that the "husband of one wife" phrase in 1 Timothy 3:2 rules out a polygamist in the pastorate. But some missionaries realize that the question is more thorny. In warring tribal societies with relatively few men, polygamy is considered a civic virtue, necessary to the survival of the tribe. Shall the missionary tell a polygamist to divorce his wives? but what about his past promise to support them? Shall he support them all financially but engage in sexual relations with only the first one? but what about 1 Corinthians 7:5? What about the effects of a separation on his children by second and third wives? And is a man who has conducted himself blamelessly in a polygamist society to be kept from the ministry?