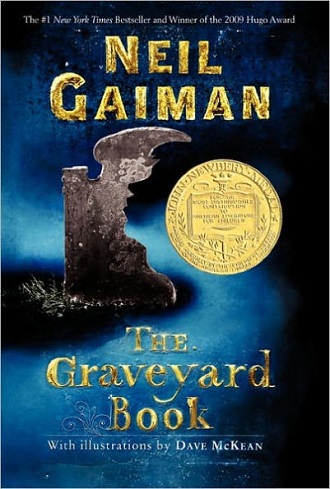 The Graveyard Book by Neil Gaiman is the recipient of the 2009 Newbery Award1. Mr. Gaiman is a British author who is recognized as a leading postmodern writer2 in a broad range of genres, including the Sandman comic series, graphic novels, and prose for children and adults. The Graveyard Book joins the ranks of earlier Newbery winners in the midst of a larger, ongoing discussion regarding the diminishing popular appeal of recent winners.3 The Graveyard Book also enters the marketplace at a time when dark books have commanded attention for a full decade. Regardless of reader opinions pro or con, it is a fact that recent books featuring wizards, vampires, and unfortunate events have garnered strong sales and unparalleled interest. It is likely that this 2009 Newbery Award winning book populated by more ghosts than people will enjoy similar success and will put to rest for now the concern about popular appeal.

The Graveyard Book is, in a word, macabre. This gothic mystery melds elements of the graphic novel with traditional story form, and chapter one opens with both illustrations and text that describe the man Jack as he makes his way to the very top of the house to murder the fourth and final member of a family, an unnamed toddler. The killer can smell the child and tracks him to his crib in the dim moonlight only to discover that the child has escaped, and he fails to complete his mission. For now.

This child’s recently murdered mother petitions Mr. and Mrs. Owens, also departed souls, to protect her son. They agree and name him Nobody Owens—Bod for short. Much as the wolves took the man child Mowgli into their care in Kipling’s tale, the inhabitants of the graveyard take Bod in and grant him the Freedom of the Graveyard that allows him safe access to the entire cemetery—both above ground and below. Bod is safe only within the graveyard; danger for him resides in the land of the living. His schooling comes from his guardian, Silas, who is neither fully living nor fully dead. Silas teaches Bod skills from both worlds—reading and writing as well as Fading and Dreamwalking. Bod’s unique schooling equips him for the predictable moment near the end of the book when the man Jack re-enters the story to complete his grisly task.

Ghost stories, both chilling and comedic, have long been a popular form of literature. And as a ghost story Gaiman’s tale stands tall. This book (for ages 10 and up according to the publisher) has well-developed characters placed into an imaginative, yet believable setting. The plot moves forward in well-paced, deliberate stages. From a purely literary perspective, it is well written and engaging. Bod is raised by quirky, caring ghosts and ghouls, and the macabre story has an oddly winsome quality that will be enjoyed by many who have delighted in the dark stories of recent years.

But that is not the end of the story. Into the fabric of every tale a theme is woven, and this is where the thoughtful reader must focus to determine whether or not a specific book has personal worth.

Among the numerous themes that undergird The Graveyard Book, the theme of belonging rises to the surface early on when Silas says, "It must be good to have somewhere that you belong. Somewhere that’s home."4 One doesn’t have to look far in daily life to find people who are desperate to belong somewhere or to someone, and so this theme rings true.

Hand in glove with the need to belong is the theme of familial love, but in this case it is nontraditional family love reminiscent of that seen in Kipling’s exotic story from a century past. Knowing that Mr. Gaiman is unabashedly postmodern in his thinking, however, the nontraditional focus may carry additional meaning in light of the cultural battles being waged today over the biblical model of family.

The Christian worldview demands that the presence of evil—that exists in real life as well as in fiction—leads to the proper conclusion. Even though this is a work of imaginative fiction, the evil in The Graveyard Book is that death is safer than life—truth turned onits head. According to Scripture the single most important belief in life leads a man to his ultimate destiny, either with God or separated from Him for eternity. But according to Gaiman, in evil there is both safety and harm; it is good and it is bad; it just depends. Even the most fanciful of tales must align with Truth, and on this point, Gaiman falls short.

Yet another thematic concern comes from the man Jack’s explanation for why he killed Bod’s family. Jack says, "We killed you for protection. Long time ago, one of our people … foresaw that one day there would be a child born who would walk the borderland between the living and the dead. That if this child grew to adulthood it would mean the end of our order and all we stand for."5 No doubt, Gaiman is wrapping up the literary motive for the murderous actions that set his story in motion and that will likely draw it to a close, but from a biblical perspective that single piece of dialogue is more chilling than anything else in the book. There is a Child who was born to bring the dead into life everlasting, and He will ultimately bring to an end all that was and is evil. That fact is not fiction, and for the believer it is not Truth to be taken lightly.

Curiously enough a surface reading of The Graveyard Book is compelling in its way, just as Bod’s life above ground draws the reader’s concern; but below ground in the thematic caverns of this tale, postmodernism is shrouded in the macabre, and those who enter here should take great care.

3 Anita Silvey, "Has the Newbery Lost Its Way?"