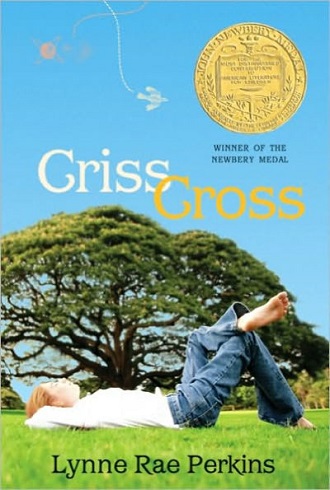 Criss Cross by Lynne Rae Perkins is the winner of the 2006 Newbery Award. Ms. Perkins has several picture books to her credit as well as one other novel, All Alone in the Universe.

Criss Cross opens with the line "She wished something would happen," a seemingly innocuous line that purports a contemporary theme to an unusual book. We’ll return to this line by and by.

Paul Fleishman won the Newbery Award in 1989 with a book of poetry, Joyful Noise: Poems for Two Voices, and nearly ten years later in 1998 Karen Hesse won with Out of the Dust written in free verse. Ms. Perkins takes the poetic presentation far beyond either of those titles using a wide variety of literary forms to tell her story, forms that include haiku, song lyrics, split screen format, and more. All of these forms combine to follow the timeline of several young teens through the end of their school year into the summer, although the concept of school and the concept of summer are relatively inconsequential.

Criss Cross could best be described as a linear collection of scenes rather than the more traditional literary form that features a plot with rising action, a crisis, and a resolution. The flyleaf of the book indicates that this book is for "ages 10 up," and it may be that the unusual format will be difficult for the target readers to follow, much less engage in. (It will be interesting to see if young people will add this award-winning title to student-generated lists of favorite books.)

Each scene features one or more of the primary characters—Debbie, Patty, Hector, Lenny, and Phil—with only loose connections between each scene. The format itself is a fairly random crisscrossing of people and events to no apparent end. Because there is no clear plot, there is nothing at risk, and risk is something many young readers expect in a book. In Criss Cross there is nothing to gain; there is nothing to lose. Each reader is simply an observer of various vignettes in the lives of these characters.

Are you scratching your head? Are you wondering what this book is really about? Well, then, you are in good company. The lack of "something happening" is a recurring concern being voiced by reviewers as the book works its way into the hands of 21st century readers.

We know who the characters are … by name, that is. Yet none of them is well developed into a round, believable character, and so it is difficult even as an adult reader to care about any of them.

We know that Debbie loses her necklace, helps her father with a basin wrench, and assists old Mrs. Bruning with some household tasks. We learn that Lenny is a genius, that his chewing tobacco smells awful, and that he likes to sit in his father’s truck with these other characters listening to a radio program called "Criss Cross," a program that must be something like "A Prairie Home Companion." Hector learns to play the guitar. Patty gossips in haiku. And Phil was Debbie’s childhood friend. We learn these bits and more, but with little understanding of how the dots should be or could be connected.

Barbara Barstow, the Newbery Award Committee Chair, calls this book a "poetic, postmodern novel [that] experiments with a variety of styles."1 And that brings us back to the opening sentence: "She wished something would happen." From that sentence throughout most of the 337 pages, very little does happen. Very little of consequence. But the meaning of the book ultimately comes full circle in the final scene of the book. In the last vignette there is the possibility of a gently romantic moment between Debbie and Hector where each one looks at the other, but not at the same moment, and so the author writes, "If it had been at the same moment, something might have happened. . . . Their paths crossed, but they missed each other."2

The unifying factor of this book has far less to do with traditional literary elements of character, plot, and setting. It seems that the one constant is the philosophical thread of postmodernism that runs through the book, resting on the belief that humans create their own reality, follow their own laws, and trust in their own salvation.

Could anything be farther from the Truth? For the believer, our sovereign God is the Creator and Sustainer of everything, and more importantly, the Savior of those who accept His gift. There is not room here to do justice to the topic of the providence of God, but it is enough to say that the theme of Criss Cross is antithetical to the biblical theme of a sovereign God. Does that mean this book should be assigned to a banned book list? No. But it does mean that there is a subtle thread of postmodern thought that requires careful reading.

If you want to read a book that is interesting in its construction, then Criss Cross may just fit the bill. If you want to raise some talking points about human beliefs that drive the lives of some people, this title could provide opportunities for that. But if you want a book that demonstrates Truth in action, Criss Cross is probably not the right choice.