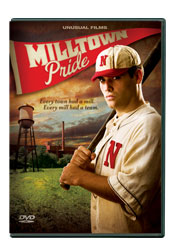 Will Wright dreams of playing baseball in the big leagues and is ready to sacrifice anything to make it happen.

But in South Carolina during the 1920s, the only path to pro baseball is through the local textile mill team. Against the wishes of his wealthy father, Will leaves his family and privileged life behind to work in the harsh conditions at Newton Mill. His natural talent on the field makes him the rising star of the mill-league team—and also earns him a dangerous rival.

How much will he risk for his chance at the big leagues? And when you hit rock bottom, is there a way up?

From the producers of the award-winning Sheffey, Unusual Films continues its 60-year legacy of quality, family-friendly films with Milltown Pride. Set in the 1920s, Milltown Pride tells the story of a young man who dreams of playing professional baseball, his rise as a baseball star, his fall from grace and the redemption he finds through faith and love.