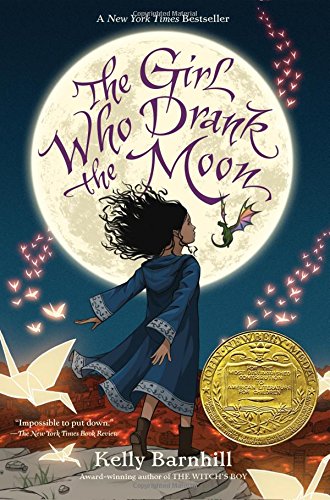 The recipient of the 2017 Newbery Award is Kelly Barnhill’s The Girl Who Drank the Moon,1 a middle grade novel from Algonquin Young Readers. Barnhill’s publishing credits to date include children’s nonfiction books, short stories, one novella, and several youth novels.2 The Girl Who Drank the Moon has garnered top honors on a number of best-book and top-choice lists compiled by libraries and periodicals, but in the months immediately following the Newbery announcement, the title had yet to appear on children’s choice lists. It may be inherent in the literary-award system that adults choose for children differently from how children choose for themselves, but the observation is at least a curious one.

The Girl Who Drank the Moon is an artistically written fantasy with a fairy-tale air about it that will best appeal to lovers of fantasy.

The story begins in the Protectorate on the annual Day of Sacrifice. What has happened every year before, happens again. The youngest baby is carried deep into the forest to be left as a sacrifice for the witch. The Elders offer no resistance to this horrific act, having heard for years that unless they leave a sacrifice, the witch will destroy their village. “Sacrifice one or sacrifice all” they have been told.3 Because the story is told from the omniscient point of view, the reader will soon see that the witch waits each year not to kill the baby but to rescue it and to place it with a loving family in the Outside Cities.

In this particular year the witch cradles the newly sacrificed infant in one arm and reaches her other hand high to gather threads of starlight to feed the baby. But she fails to notice that the sticky, sweet light is heavier than normal starlight. It is not until the baby is contentedly full of moonlight that the witch realizes her mistake, but by then it is too late. The baby girl has been enmagicked—a turn of events both wonderful and fearful. The baby, now named Luna, will not know how to use her powers, and so her magic must be suppressed, contained, even overlooked . . . for now. Xan, the witch, knows that Luna’s magic will emerge when she turns thirteen, but until that time Xan must teach Luna so that she can manage her powers when the time comes. The witch knows that when Luna’s magic is unleashed, Xan can teach her nothing more, for the thirteenth year of Luna’s life will mark the end of Xan’s.

From the outset, the reader is led to believe what the citizens of the Protectorate have long been taught: safety lies in the Bog, the Protectorate, and the convent of the Sisters of the Star, but certainly not with the witch or in her forest or the cities beyond. And yet a shadow is cast on these teachings in the italicized pages scattered throughout the book. It is left to the reader to piece together the truth about various characters as well as more accurate histories of the Protectorate and the convent. As the truth emerges, so does the theme of the book: things are not always what they seem.

This story has its share of both pros and cons. On the one hand, the writing is lovely with descriptive passages like this: “He was so old then. Impossibly old. He was all angles and bones and papery skin, like a cricket.”4 The author presents us with a cast of characters—some winsome and some despicable—and she uses both to showcase the warmth of true friendship and deep familial love. And, in the end, the good guys win.

On the other hand, troubling scenes abound that may be hard for some young readers to digest. Potentially frightening scenes include those set in the dark forest, those with the mother whose sanity is compromised by the sacrifice of her child, and one where masses of paper birds viciously attack Antain, a noble man who seeks to put an end to the Day of Sacrifice. Although these dark scenes are balanced with lighter sections, their very presence may be disturbing.

There is an undercurrent to the text that is spiritual, albeit not Christian. To illustrate, creation scenes in the book read like this: “In the beginning, there was only Bog, and Bog, and Bog. The Bog was everything, and everything was Bog,”5 and “In the beginning, there was the Bog. And the Bog covered the world and the Bog was the world and the world was the Bog.”6 Simply put, this smacks of pantheism. This and other nuanced concepts may go over the head of the reader who is focused on the larger story.

The novel contains role reversals, literary sleights of hand, and mind games aplenty. The attentive reader will discover what is true and what is not, who is compassionate and who is malevolent, what is worthy and what is fraudulent. The sum total of all these pieces and parts is a layered, complex story that might be better suited to YA readers. Because things are not always what they seem, The Girl Who Drank the Moon is a good candidate for guided discussion to unveil themes, identify brainwashing, and understand the actual conclusion to Luna’s story.

The author alludes to this literary complexity when she writes, “A story can tell the truth, … but a story can also lie. Stories can bend and twist and obfuscate. Controlling stories is power indeed.”7 The truth is that no author can wield her storytelling powers for all readers, so perhaps the real power belongs to the reader who can see the truth and the lies for what they are.