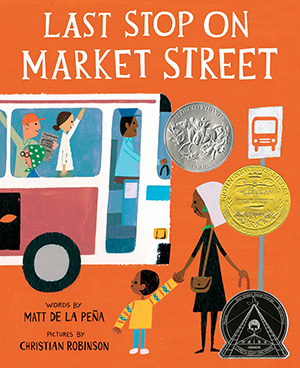 The ALA presented the 2016 Newbery Award to Last Stop on Market Street by Matt De La Peña. Commencing in 1922, the Newbery Medal has been awarded annually to the “most distinguished contribution to American literature for children,”1 and the vast majority of winners have been novels for children. There is nothing in the Newbery Medal terms and criteria2 that precludes naming a picture book as the recipient, but to do so is certainly unusual. Last Stop on Market Street (acrylic collage paintings) and A Visit to William Blake’s Inn (1982, whimsical gouache paintings) are the only two picture books ever to receive the top honor. Two other picture books garnered Newbery Honor awards—Doctor DeSoto (1983, four-color cartoons) and Millions of Cats (1939, black-and-white folk art)—as did a scant number of illustrated poetry books.

Which means what? It probably means only that this year’s award was unexpected by many and that some readers were disappointed that a novel was passed over in favor of a very short story told in part by pictures. A true picture book is characterized by the symbiosis of the text and illustrations, and once these elements have been joined, neither the story nor the art is ever fully complete without the other. That is true of this book. When CJ wishes for “one of those,”3 the reader has to refer to the illustration to know that he wants a device with earphones. Other illustrations likewise supply elements not stated in the story. That’s how picture books work. And that essential inclusion of illustrations is exactly why many readers were disappointed that this book won an award that has historically gone to a book whose words alone merit distinction.

Last Stop on Market Street is a gentle story of a grandmother and her grandson crossing the city by bus from their church to the soup kitchen one Sunday. CJ raises questions along the way that suggest his sadness or dissatisfaction as much as his curiosity. Each time his grandmother’s answers are upbeat and offer a thoughtful perspective. For example, when CJ asks why they have to wait in the rain, Nana reminds him that “trees get thirsty, too.”4 The two look at and talk with various passengers who ride the bus with them, and when CJ asks why a blind man on the bus can’t see, Nana says, “Some people watch the worlds with their ears.”5

The interaction between the two is warm and loving. Every child should be so blessed as to enjoy such a Nana. The inclusion of the church at the beginning of the story and the soup kitchen at the end suggests that CJ is learning values rooted in goodness, at least. Whether they are rooted in the church, too, is left to the reader’s judgment. The people on the bus and in the city are widely diverse in appearance, ability, and accomplishments—diversity one would expect in the urban setting. The cityscape through which they travel is shown with illustrations that are authentic more than pretty. The crumbling sidewalks, graffiti-tagged buildings, and boarded-over windows referenced in both text and illustration may have limited appeal for some readers.

Nana delivers the take-away line near the end of the story after CJ asks why the city is so dirty. She responds, “Sometimes when you are surrounded by dirt, CJ, you’re a better witness for what’s beautiful.”6 That line carries a deeper meaning for those who are Christian believers, for we know that it is in the darkness of a broken world that the light of the Gospel shines most brightly. What a lovely talking point to discuss with young readers.

The book could end well with Nana’s fine statement, but because it does not, the soup kitchen spread on the closing pages of the book seems tacked on. That piece of the story might have felt more connected to the rest had some of the travelers they encountered along the way shown up here too or had an early question from CJ about the kitchen been answered by the final illustration.

Last Stop on Market Street is a fine story, a positive story, and now an award-winning story. There is little dissension in online discussions about those points. But whether this picture book is “marked by conspicuous excellence,”7 whether it is the cream of the crop in 2016, and whether it should have outstripped well-crafted novels remain questions not even Nana could answer.