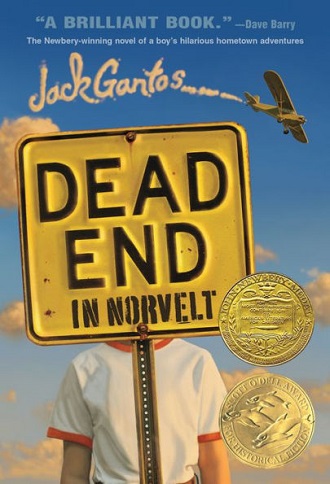 Award-winning author Jack Gantos has written books for all ages, ranging from the Rotten Ralph picture books to his Joey Pigza series for grades 5–7 and Hole in My Life, a memoir for older readers. Mr. Gantos’s newest novel, Dead End in Norvelt,1 is the winner of the ALA’s 2012 Newbery Award2 that honors the most distinguished contribution to American literature for children. Dead End in Norvelt has also been named the 2012 winner of the Scott O’Dell Award3 for historical fiction for children and young adults.

Dead End in Norvelt is an autobiographical summer story of twelve-year-old Jack Gantos who starts this particular summer by accidentally firing his father’s Japanese sniper rifle at the screen of the local drive-in movie. (This while watching a Japanese war movie he was not supposed to watch and while playing with his father’s gun that he was not supposed to touch and then lying to his mother about both. The disobedience and lying seem not to be clearly addressed here or at other times elsewhere in the book.) To be sure, Jack did not know there was a bullet in the chamber, but one bullet is all it takes for his mother to ground him for life with the hyperbole mothers are sometimes known for; however, the summer that follows is not as dull for Jack as one might expect.

Jack’s mother intends to keep him busy, and to that end she loans him to their neighbor Miss Volker, an elderly woman who is responsible for writing the town’s obituaries and companion “This Day in History” columns for the Norvelt News. Miss Volker’s arthritic fingers can no longer manage the keys of her typewriter, and although Jack does not know how to type, he learns to hunt and peck well enough to become her scribe. The number of obituaries needed for a town so small in the course of a single summer seems disproportionately high, but this is fiction after all.

Twelve-year-old Jack also learns to drive Miss Volker’s Plymouth Valiant, and he chauffeurs her to the scene of each new death—all deaths presumably of natural causes. On that point things are not quite what they seem, but the reasons for the deaths are not large enough to qualify the book as a mystery, only as an adventure that is somewhat mysterious. The reader quickly learns that Jack’s fear-induced nosebleeds mark new events in the progression of the plot. The sight of a cadaver in the morgue or a newly dead body elsewhere in Norvelt qualifies for Jack as a major shock, but there are plenty of minor shocks as well, and his nose inadvertently bleeds every time. (If there is not a quota for the maximum number of nosebleeds per book, there should be.)

Norvelt was (and is) an actual town founded by Eleanor Roosevelt and named for the last syllables of her name—EleaNOR RooseVELT. By 1962, the time of this novel, the town is dying, and Miss Volker is completing her promise to the First Lady to keep health records on the original two-hundred-fifty families. Each obituary is a countdown of sorts to the end of Norvelt as it once was, and each “This Day in History” column reinforces the theme of this book that Miss Volker herself states when she tells Jack, “If you don’t know your history you won’t know the difference between the truth and wishful thinking.”4 That’s a worthy theme, but its repeated delivery throughout the book is a bit heavy handed.

There are a number of interesting scenes and surface events in the course of the book that are all lightly connected to the demise of Norvelt. Had they been more critical to the plot and Jack’s summer in exile, they would be more memorable.

The characters include Jack and his parents, Miss Volker, and a handful of other citizens as well as a band of Hells Angels bikers who ride into town, wreak havoc, and ride back out. It is a quirky cast that tips heavily toward senior citizens with only token appearances of youthful peers. While Jack’s grounding for life justifies the ages of the characters, that element may minimize the interest young readers will have in his story.

Jack’s language is sometimes crass, sometimes vulgar, and sometimes euphemistically profane. (Isn’t that an odd concept—a euphemistic profanity?) While his word choices may amuse some readers, a thoughtful reader will question whether they should. There are scenes that will cause some readers to cringe a bit, including the scene where Miss Volker cauterizes Jack’s nose with primitive instruments while he lies atop her kitchen table. (Yes, the woman with the crippled, arthritic hands does this.)

Dead End in Norvelt is not morally bankrupt as some award winners are. But neither is Dead End in Norvelt an engaging literary romp. This award winner may occupy some readers for the time it takes to read from one cover to the next, but the jury is mixed on whether Dead End in Norvelt is the most distinguished contribution to American literature for children this year. That is a subjective evaluation at best, but chances are good this story will best be remembered as a forgettable Newbery winner. And that is sad for the writer and his readers alike.