2010 Newbery Award Winner Book Review:
When You Reach Me 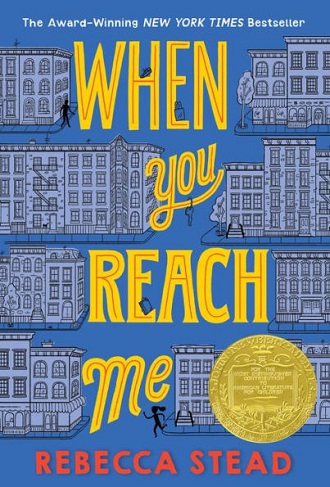 When You Reach Me by Rebecca Stead is the 2010 Newbery Award Winner1. The author—a New York lawyer turned children’s writer—has struck commendation gold with this her second novel. According to the publisher’s website2 the book has received sixteen additional awards (as of April 2010), primarily in the categories of recommended or best books of the year, and all—it should be noted—from the adult perspective of what children will or should like. Whether the same accolades will come from children remains to be seen.

Ms. Stead set this novel for middle-grade readers (ages 8–12) in the late 1970s in a small section of a New York neighborhood at Miranda’s apartment building and in her school, at Belle’s Market and Jimmy’s Deli, and on the street corner where the mailbox stands.

On the surface the book seems like yet another tale of friendship, but what begins as a school story fast becomes a quirky mixture of story types: part mystery, part historical fiction, and part fantasy—a complicated hybrid that is difficult to adequately summarize in a few paragraphs. Before the reader is fully settled into the protagonist Miranda’s tale, the author introduces a sort of homage to Madeleine L’Engle’s A Wrinkle in Time by adding a similar time travel element to Miranda’s world. What was a familiar story form shifts to speculative fiction.

Miranda’s favorite book is A Wrinkle in Time, and she discusses with Marcus, a sixth grader at her school, the idea of arriving somewhere sooner than when you left. She insists that common sense says this cannot happen; he counters with Einstein’s thinking that “common sense is just habit of thought, but a lot of the time it just gets in the way. . . . In the way of what’s true.”3 And with that the stage is set for the author’s shifting use of verb tenses, and time travel for Miranda begins. She starts to find notes: unsigned notes left in strange places; eerie notes that seem to predict the future; clear notes with specific instructions expressly for her. Who is sending them? Were they written in the past? Or could they come from the future? Miranda wants to know how the sender knows her and even more, how her response could possibly save a friend’s life.

Miranda shares the first note with her mother, and both are frightened by the prospect that someone has broken into their apartment, though only a pair of men’s shoes appears to be missing. The second note instructs Miranda not to tell anyone about the notes any more, a request she complies with. The third and fourth notes give specific instructions and offer proof that the sender really does know her situation as well as what is to come.

Ms. Stead deftly fills the story with an abundance of subtle foreshadowing, but many of these clues are likely to be missed in this complex story, told in a morphing of genres. Even adult readers may find that a second reading of the book is necessary to connect all the dots. And if that is so, middle-grade readers may find the book more puzzling than compelling. Likewise, those who are unfamiliar with A Wrinkle in Time may find it difficult to get their bearings in Miranda’s world.

When You Reach Me is a quirky book whose elements of time travel and out-of-the-box thinking will be intriguing to some and confusing to others. Some readers may be frightened by the apartment break-in, by the encounters with the “laughing man” who sleeps under the corner mailbox, and by the neighborhood bullying that occurs as the children walk to and from school. There is a “stalker-esque” sense that comes from the appearance of the mysterious notes (even though they are not as dangerous as they initially seem). Miranda’s mother has her own fears for her daughter’s safety: on the streets of their neighborhood, at times when Miranda fails to tell her mother where she is going, and once when she wants to use an oven without adult supervision.

The story has an overarching darkness that is more perceived than articulated, and yet there is also a thread of warm, familial love and developing friendships.

A primary theme is the importance of friendships. Miranda and her friends learn both how to maintain friendships without stifling them and how to develop new friendships without regard to race or wealth or apparent circumstances in life. These are good life lessons to learn from a book.

Discerning readers should not be passive recipients, but rather should mentally interact with text and from that perspective there is more that Christians can draw from this book. One characteristic of time-travel stories is that the characters have specific knowledge of events outside of their present time as well as the ability to manipulate those events in order to change the outcome. Or to say this in another way: in time travel it is possible for people to alter providence. And that point should give Christians pause.

While Rebecca Stead’s book does not deliver a Christian message, her complicated story is thought provoking; it is a speculative springboard from which a discerning reader can consider true reality.

For example, Miranda says of the mysterious notes, “I finally believed that whoever wrote me those notes actually knew about things before they happened. Somehow.”4

Christians have also received a written message; ours is real; ours is from the One who does know all that has happened in the past, everything that is happening now, and all that will happen in the future. This is true, Marcus.

She goes on to say, “. . . the worst part: I was alone.”5And that, Miranda, is the best part of our story. According to the written Word, with redeeming faith in God, we are not alone.