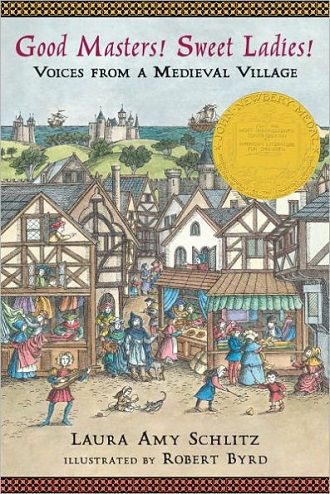 The 2008 Newbery Medal Winner is Good Masters! Sweet Ladies! by Laura Amy Schlitz,1 a school librarian at Baltimore’s Park School. This, her fourth published book, is a book whose very writing is a curious story in its own right.

When the fifth-grade students at her school were looking for a play set in the Middle Ages with interesting parts for all of them, she did what good librarians do and began the search for just the right play. But unlike most librarians, finding nothing that fully satisfied the need, she picked up her own pen and wrote the play herself—a play whose twenty monologues and two dialogues became the substance of this book. While novels are the most common form for Newbery prizes, the 2008 winner uses a wide variety of poetic styles.

Although the Newbery Award is given to the author for the writing, Good Masters! Sweet Ladies! cannot be fairly reviewed without noting the complementary illustrations by Robert Byrd that open each monologue and visually inform the book throughout. The artwork suits the text and helps to make an informative book also an interesting book.

There are six sections labeled "A Little Background," which discuss topics such as crop rotation, falconry, the Crusades, and the interaction between Christians and Jews. Sidebar notes give additional information that help a modern reader understand the culture of that time. All of these features give this book good potential as a resource book for a study of the Middle Ages, but the monologues are the real story.

The monologues in Good Masters! Sweet Ladies! are verbal portraits of various young people who populate the area in and around an authentic, but fictional, manor of the 1200s. Each character is in some way connected to the others, though the nature of the association is colored by rank or wealth and may be either subtle or direct.

Hugo, the lord’s nephew, opens the book by telling about a boar hunt with his uncle—a rite of passage into manhood. The story moves from Hugo to Taggot, the blacksmith’s daughter, who pulls a stone from the shoe of Hugo’s mount following the hunt. Other monologues feature farmers, shepherds, and the children of doctors and millers and knights. Stories are told by Medieval pilgrims, a mud slinger, and even Jack, the "halfwit" (who may not be all that dull). Isobel, the lord’s daughter, begins her vignette noticing the stain on her dress and ends with a brief commentary on social status. And Mogg, the villein’s daughter, recounts how the lord of the manor comes to claim her widowed mother’s best beast, a practice that was the lord’s right. The sidebar notes that "villein" in that day referred to "a peasant who was not free" (p. 42), which could serve as a talking point about the development and changes of language.

These monologues not only tell facts about the occupations necessary to sustain life in the Middle Ages; they also put a human voice on the individuals who were so engaged. Taggot reveals the fact that she’s never seen what she looks like, uncovering for the modern reader the fact that mirrors are fairly new on the timeline of history. Taggot has been told that she is like her grandfather, "a giant of a man" (p. 5), and she suspects from looking in the Round Pool that she is "ugly. Big and ugly" (p. 6). Otho, the miller’s son, says of his family’s business that he too has learned how to "cheat the hungry customer and earn my daily bread" (p. 27). And an orphan boy named Pask speaks of hunger and speaks of cold, and knows that both must be endured if he—a runaway—is to earn his freedom from a wretched lord—a process that will take a year and a day.

Readers will be reminded by the text that the lives of people in the Middle Ages were dominated by the Catholic Church. There are references to the saints, popes, and practices common to Catholicism.

These are voices that reveal humanity as it is in all places and in all times. There are difficult tasks to accomplish; there is competition between classes, the wealthy and the poor, the pretty and the pitiful, the mentally adept and the dullard; there is human fatalism revealed by men who feel bound by a dismal and difficult path with an uncertain and unhappy future. Such fatalism is justified in a life lived apart from God in any era, and reading about such a sad condition has merit when viewed through the lens of Scripture, where salvation and hope are free to all.

Good Masters! Sweet Ladies! tells human stories in warm and varied voices from a distant time in history, a time with which twenty-first-century readers may be unfamiliar. We know that Ms. Schlitz’s book was written for a specific group of fifth graders and presumably served them well, but you will have to look at a little background of your own to see whether the book will serve you with the same success.