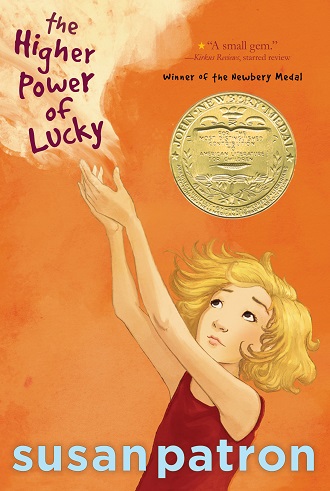 The Higher Power of Lucky by Susan Patron is the recipient of the 2007 Newbery Award. Ms. Patron (rhymes with "phone") is a long time children’s librarian at the Los Angeles Public Library and the author of several books, both YA novels and picture books. As both a librarian and a writer, she is no stranger to children’s literature and surely should have been aware of the stir this book could cause.

A number of professional and consumer reviews alike, on paper and online, have focused on single snippets of text, leading to charges of narrow thinking and a good bit of harrumphing on every side. The primary complaint has to do with the use of an anatomically correct word not typically spoken aloud in polite company—a concept grandmothers once referred to as "decorum" and certainly a fair topic for discussion.

Rather than joining that debate here, however, this review will look more to the forest than the trees, at the larger story which should be just as important for parents and teachers to consider, if not more so.

Ten-year-old Lucky Trimble is the plucky star of this bittersweet survival story, and her backstory is both complex and critical to understanding why this child is on a solitary quest to find her own Higher Power.1

Lucky’s father was once married to a French lady named Brigitte (say Bree-JEET) and then divorced. Later he was married to an American artist named Lucille and then divorced, but after Lucky was born. When Lucky was eight, her mother Lucille was accidentally electrocuted following a desert rainstorm, and Lucky’s father in absentia contacted ex-wife Brigitte in France to come to America and serve temporarily as Lucky’s Guardian. Apparently the idea of his caring for Lucky was inconvenient, and so two years later Brigitte is still watching over Lucky in Hard Pan, California, population 43. Now Lucky carries a survival kit backpack daily and prepares herself to be left once more, feeling certain that Brigitte will soon tire of being Guardian and will return to her beloved France. The theme of loss and abandonment has begun.

The reader meets Lucky in chapter one sitting by the hole in the wall of the Hard Pan Found Object Wind Chime Museum and Visitor Center quietly listening to stories told by members of Alcoholics Anonymous who have found their Higher Power. When they are done with their weekly meeting, she will clean the museum patio of cigarette butts before the meeting of Smokers Anonymous, just as she will clear away the detritus of each of the Anonymous groups who regularly meet at the museum in Hard Pan. It is through this hole and from these people that she hopes to learn how to find her own Higher Power.

What follows is a story of Lucky and her friends, ten-year-old Lincoln Clinton Carter Kennedy, Presidential wannabe and "knot tyer" extraordinaire, and five-year-old motherless Miles who lives with his grandmother. They share childhood adventures in much the same way as Ramona Quimby and her friends on Klickitat Street.

There is gentle humor as Lincoln uses Lucky’s marker to add a colon to the road sign "Slow Children at Play" so that it more accurately reads "Slow: Children . . ." There is blunt honesty as Lucky acknowledges that her own active meanness gland kicks in when Miles tries her patience. There is poignant emotion when it falls to Lucky to determine what to do with her own mother’s ashes and when to run away from Brigitte before Brigitte can run away from her.

Misguided and childish logic leads Lucky to three "signs" that affirm her decision to run away: 1) She and Lincoln "eyesmile" over Miles’s head on the school bus which tells her that Lincoln understands her thoughts; 2) She suddenly realizes that her sandy-colored hair, eyes, and skin are a Darwinian adaptation that will allow her to blend in with the desert sand; and 3) The impending dust storm means that bus riders will be sent home early, giving Lucky extra time to run away before Brigitte discovers that she is gone. Her plan goes awry when her meanness gland unloads once again on Miles, and he too runs away ending up near the dugout where she plans to hide.

Ms. Patron’s writing style is easy and accessible. She shows that she knows the kind of story elements that will appeal to her young audience, including the use of the debated anatomical term that, like it or not, carries a "forbidden fruit" appeal for elementary school children. Without a doubt this is a fresh take on the old survival story.

But the themes, oh, her themes. Abandonment, self-sufficiency, Higher Powers (any kind will do, thank you very much) drive the story forward and yet without lasting hope. Brigitte will stay. Lucky is capable of taking care of both herself and Miles in the dust storm, and thankfully she can put away her survival backpack . . . for now. But in the midst of the "happily ever after" ending there remains the bittersweet echo of words written in chapter twelve of the book: ". . . even if you carry a survival kit around with you at all times, it won’t guarantee you’ll survive. No kit in the world can protect you from all the possible bad things."2

That statement is so very true, and it is true because A Higher Power can never replace The Higher Power Who alone gives hope and help to His children. Debate individual words if you please, but step back for a broader view as well; for whether you look at the forest or the trees, these literary woods contain some difficult places that are due some thoughtful consideration.

1 The author capitalizes "Guardian" and "Higher Power" throughout the book, so this review has followed her convention.